Sofia Black-D’Elia Has No Problem Taking Her Time

Gen-Z may be dominating your screen every which way, but Millennials are still having their moment, too—albeit a less dazzling, more pared down, and, dare we say, realistic one. Anxieties about entering your thirties and figuring out what kind of mark you’re going to leave seem to be at an all time high—just look at Tick, Tick… Boom!, The Worst Person in the World, or even Sally Rooney’s latest novel, Beautiful World, Where Are You if you need proof. The upward trend in addiction narratives is worth noting, too—Euphoria has been both lauded and criticized for its raw, and at times over-the-top depictions of a teen struggling through Narcotics Anonymous meetings between (sometimes attending) high school classes. It’s been compared to the after-school special Canadian drama Degrassi (which will be rebooted for the fifth time next year), and, more accurately, has drawn comparisons to the U.K. series Skins. 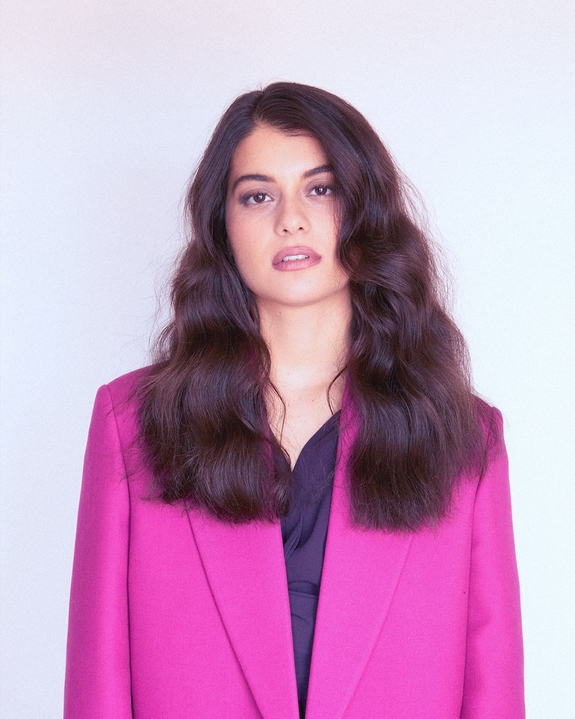 Ironically, Sofia Black-D’Elia also starred on the short-lived American remake of the latter, a beloved British drama—she was Tea, the bisexual bad-girl high school cheerleader. The actress returns to the small screen in January—but this time, she plays Sam, another bisexual “bad girl,” though much more realistic in her struggle with alcoholism and crisis about nearing 30, in Single Drunk Female.

Black-D’Elia, who also recently turned 30, can relate to some of Sam’s antics on display in Single Drunk Female. “You tell yourself in your early twenties that you know exactly who you are, and you project it really loudly into the world,” the actress says with a laugh when she meets me via Zoom, flanked by a calendar and a portrait of a cat hanging on the wall behind her in her Brooklyn home. “Then you start to realize you don’t know as much as you thought you did and you have to rebuild. It was nice to play somebody who’s at the same part of their life and journey as I am, even though the things we struggle with and our vices are very different.”

Created by Simone Finch and produced by Jenni Konner and Leslye Headland, the series also stars Rebecca Henderson, Madeline Wise, Garrick Bernard, and Ally Sheedy. Black-D’Elia says it was the team of women behind Single Drunk Female that drew her to the project. “It’s a very bizarre time to be making things,” she says of the series, which was filmed during the pandemic, between Chicago and Atlanta. When she first took a look at Finch’s script, she thought it was so specific—which meant to her that it had to be grounded in some truth, and couldn’t have just been some abstract idea of what sobriety might look like. “Tonally, it was a really interesting challenge,” she adds. “It’s a half-hour comedy, but it’s about something really serious and difficult that a lot of young people go through.”

In the series, Sam’s thick Boston accent emerges, though Black-D’Elia’s actual speaking voice does not take on the characteristic non-rhotic Massachusetts intonation. Black-D’Elia grew up in New Jersey, and although she began acting as a teenager—from her first appearance on Skins to the original Gossip Girl, on which she recurred throughout the sixth and final season—she tells me she does not have the typical young performer’s backstory.

Being an actress was not her childhood dream. Black-D’Elia attended dance school, and enjoyed one of her musical theater classes, but she also played sports, and had a standard suburban New Jersey upbringing. Her first role, on Skins, came to her during her senior year of high school after she had been accepted into Rutgers University. “I didn’t know anybody who did this, and it’s a weird thing to be into if you didn’t grow up around it,” she says with a laugh. “I deferred from Rutgers for a year when Skins got picked up thinking I would shoot the show and then go to college. There was no plan.”

“I’ve really enjoyed falling in love with [acting] as an adult because I’ve gotten to establish myself as a person outside of this,” Black-D’Elia continues. “It is not my identity, it’s my job and I love it and feel really grateful to do it.” She tries, if she can, to keep herself off of social media—a tricky maneuver for an actor who stars as a regular on a network television show. In a way, it’s just part of the job. But if you talk to Black-D’Elia, she’ll tell you the great Millennial pastime of scrolling and posting on Instagram also feels “antithetical” to what she’s trying to accomplish as an actor. “I’m playing other people, and trying to tell a story and have you believe it,” she says.

Aside from the teen drama fare, Black-D’Elia has recently made her mark in darker legal thrillers: she played the murder victim in the Emmy-winning miniseries The Night Of with Riz Ahmed and John Turturro, and appears as a very complicated schoolteacher in Your Honor alongside Bryan Cranston. But when Single Drunk Female came along, it signaled a shift for the actress, who had also starred alongside Kaitlin Olson in the acclaimed network sitcom The Mick, and wanted to add more comedy in her repertoire.

Single Drunk Female, which airs weekly starting January 20 on Freeform and Hulu, follows a young woman named Samantha Fink. When we meet Sam, she is belligerently drunk off the vodka in a water bottle at her New York media office job, and accidentally assaults her boss (Jon Glaser), leading her to move back home to Boston with her mother Carol (portrayed by ’80s Brat Pack icon Sheedy) and attend Alcoholics Anonymous meetings with her sponsor Olivia (Rebecca Henderson). The premise is not as heavy as it might sound, thanks to Black-D’Elia’s empathetic and funny portrait of a Millennial in quarter-life crisis mode. “It was really nice making something that felt hopeful and felt funny,” she says. “It had moments of heaviness, but also moments of joy and connection. I think I want to be near that more right now.”

Someone can be the most fun person in the room when drunk, and other times they can be a danger to themselves and others. Sometimes they’re both in the same night. Single Drunk Female attempts to capture the complexity of that experience, and embraces what might seem like a dichotomy but often goes hand in hand when it comes to those who are struggling with alcoholism. “Often when you see stories about people suffering from alcoholism or people going through recovery, it feels really heavy. It can almost feel like an after school special, and is often very neat and tidy,” Black-D’Elia says. “I don’t think sobriety is neat and tidy at all. For a lot of people there isn’t this one cinematic rock bottom. As Sam says at one point, [there can be] a lot of rock bottoms.”

Between television gigs, Black-D’Elia has spent the last few years working in both film and on stage, appearing Off-Broadway in a play called Usual Girls in 2018, and starring in Viral, a sci-fi film directed by her partner Henry Joost and Ariel Schulman. Next, though, Black-D’Elia says she would like to do more theater, and work with more women in all avenues. “The direction I want to go in involves things that don’t feel so heavy nor are they just about frivolous, superficial things—finding the right balance is hard, but that’s definitely what I’m trying to achieve.”

“It feels so good to read something and I’m like, I have no interest in working with this guy who I know is an asshole, I have no interest in playing this part who is a sexy love interest with a dark past and wears a leather jacket, I have no interest in going to Europe to shoot a horror movie in which I have to get naked for no explicable reason,” Black-D’Elia tells me of the firmer grasp she now has on what she wants from her career. “So I say no, and if that means it takes me a little bit longer to climb this mountain I’m on, it’s fine. I’ll hang with my cats a little bit longer, no problem,” she says with a laugh, just before one of those cats walks across Black-D’Elia’s keyboard and obscures the Zoom screen. “It took me a little while to learn that lesson, and I’m really grateful that I have.”