The Mick blog: Sofia Black-D’Elia on showing Sabrina’s soft side

Every week, the cast and crew of Fox’s The Mick — the new comedy series that follows Kaitlin Olson‘s reckless Mackenzie, a.k.a. “Mickey,” who’s tasked with caring for her on-the-lam sister’s three children — is taking EW behind the scenes of the latest episode. This week, star Sofia Black-D’Elia dishes on the 13th episode, “The Bully,” where her character, Sabrina, fights back after getting bullied. 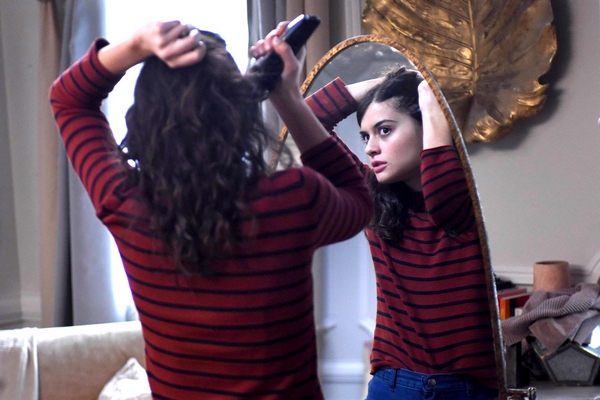 I was thrilled about this episode because I feel like this is a side of Sabrina that we haven’t seen yet. And I was really excited to do it.

My favorite part of filming it was the scene that Kaitlin and I have in my bedroom, which is a traditional pep talk flipped on its head where she’s reminding me of my inner bitch. I just had more fun filming that scene than I think I have the whole season of this show. It felt different.

This whole episode felt different, for me, because we’ve always seen Sabrina as kind of the cooler-than-thou bitch and what’s underneath all of those girls is where the humor in this episode comes from. So that scene, in particular, was really a side of her we haven’t seen. She’s kind of completely bottomed out and inconsolable. But the episode in general was really a chance for me to toy with aspects of this character that we haven’t gotten to yet. I much prefer the other side of Sabrina than the kind of angry girl that you see all the time.

I don’t think Sabrina’s growing up as much as she’s being forced to peel back the layers of her ugly personality, which I guess is a form of growing up? In that sense, I think that Mickey and Sabrina can both bring out the worst and the best in each other — depending on what your definition of what “the best” is.

—As told to Ariana Bacle