The Mick blog: Sofia Black-D’Elia on getting real about birth control

Every week, the cast and crew of Fox’s The Mick — the new comedy series that follows Kaitlin Olson’s reckless Mackenzie “Mickey,” who’s tasked with caring for her on-the-lam sister’s three children — is taking EW behind the scenes of the latest episode. This week, Sofia Black-D’Elia takes us inside the fourth episode, “The Buffer.” 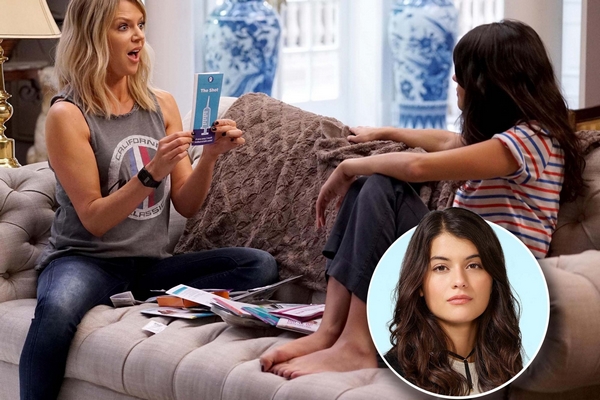 Mickey (Kaitlin Olson) doesn’t want the 17-year-old Sabrina (Sofia Black-D’Elia) to get pregnant, so she comes home with a straightforward solution: a bag of birth control options, ranging from a vaginal ring to an IUD.

“There was a moment where [Olson] and I were trying to make an IUD funny where I said to her, ‘This is pretty cool that you and I are sitting on a couch talking about an IUD on network television,’” Black-D’Elia recalls. “There was something that felt special about that to me.”

Part of what made it feel special is that it reminded Black-D’Elia of real-life conversations she had with her mother as a teen. When she read this script, she was “cracking up at how truthful” it was.

“[Contraceptives] all do kind of suck, and we have to pick one, and I remember thinking, ‘Why can’t a guy have to get something shoved up his a–?’” Black-D’Elia laughs.

Her character agrees. Sabrina is resistant to any form of birth control — including condoms — throughout the episode. That wouldn’t be such a problem if she wasn’t so… active: Sabrina and boyfriend Kai (Andy Favreau) spend much of the episode being affectionate with each other. Like, really affectionate.

“Making out that much in front of kids is really weird,” Black-D’Elia says. “I remember turning around and seeing the look on Jack Stanton’s face, who plays Ben, and thinking, this is one of the weirdest f—ing things I’ve ever done as an actor.”

But she’s not too worried about setting a bad example for the young Stanton. “I definitely felt like this is not going to be the thing that corrupts him on this show,” she laughs. “But, yeah, it definitely just felt weird.”